James Norton was very respected for his superb engineering ability and his integrity. An entrepreneur at the beginning of the motorized transportation era, he began the Norton Manufacturing Company in 1898 to produce bicycle parts. In 1902, the first Norton Motorcycle was built.

The Norton dominated the Isle of Man races from 1947-54. Known for performance, the motorcycle enjoyed worldwide demand. In the 1960's and 70's, the company produced the popular Norton Commando. The era of the vintage Norton motorcycle ended about 1977 with the demise of the British motorcycle industry. There have been attempts at revival and currently a motorcycle is being made under the marquee Norton.

Now days, the Norton motorcycle is familiar to many motorcyclists. Motorcycle restoration enthusiasts world wide seek vintage Nortons. They bring a respectable price in antique motorcycle trading circles. This site is the future home of the Norton Motorcycle Owners Forum. 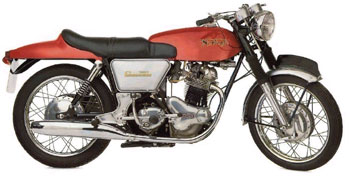 "Most motorcyclists love to spend their Sunday mornings taking off the cylinder head and re-seating the valves." Donald Heather, director of Norton, 1957.

Norton Motorcycle Magazine Ads. Click on an image to see the larger image.